December month in Australia is one of the peak seasons for the tourists, being one of the countries not to have a white Christmas and have a warm one instead. Locals prefer the outdoors activities. Hence we stuck to the tradition 🙂 We did a lot of trekking, a lot of camping, a lot of barbecue and had loads of fun while doing it. It was a 10 day relaxed yet a awesome road trip covering about 3600 km return to Sydney.

Since we were going down south towards Melbourne, most would consider Jindabyne to be a detour route. Specially during the summers, as its one of the most visited places in winter. However, the route to Jindabyne is beautiful af. Its a good 5-6 hrs drive with a minimum of 2 stops of 15 mins max on the M31 for most part of it.

Stay: Accommodation in Australia is very expensive compared to other countries, and specially during the holiday seasons, even the basic hotels can cost a bomb. All the camping grounds are booked well in advance(sometimes 6 months too). We stayed a night in Jindabyne in a hotel “Jinda Inn” which was very close to the Jindabyne lake. We did take a stroll through the stretch inspite of the unfavourable weather. It rained through out the day and next we stayed. A night during the holiday season costs about 90 AUD for 2 people. They have an standard breakfast buffet of Bread and Spreads, Cornflakes and milk and coffee. We were also offered some home made muffins.

Note: Jindabyne is usually on the colder side, even during the summer time, so make sure to pack something warm for the nights.

This is a good 7-8 hrs of drive , so be prepared for a long journey, yet one of the most beautiful roads we have been on. Majorly covering the Alphine track, this route has a lot of curves and hair pin bends, which makes it longer than expected. Once you connect to the M31, its a direct route to Melbourne.

Day 3-4 : Melbourne : We had a good family time with our close friends. We also did a small picnic in one of the local parks during the Christmas eve.

Grampian national park is about 3 hrs drive from Melbourne. It is famous for its stone canyon structure. We stayed at a camping ground “Grampians Paradise” which had beautiful mountain views. Its basically a designated area where you can pull up your tent. You can drive upto the camp ground. Although the baths and the toilets were a bit old, they were surprisingly very clean. The best part of it being the flush toilet, whereas most of the camp grounds in Australia have drop toilets.

We stayed a full 2 nights and 2 days in the Grampians Paradise. It cosy us about 96 dollars for the camp space as it was the peak season and they do have a minimum cut. They also have a lounge area and an old styled barbecue and kitchen. Its a decent stay and worth the money.

Things to do: There are a lot of hikes and trails to be done in the Grampians. Below are a few of them

Note: December is one of the hottest months in Australia, so we made sure not to drain ourselves with rigorous treks or walk. We did the treks either in the early morning, or the time closer to sunset. Mid days we mostly rested in our camp or played some indoor games.

The next destination on our itinerary was Naracoote , city close to Coonawara in South Australia(SA). Coonawara is one of the famous wine regions in SA. It is about 3 hrs drive from the Grampians. We camped at one of the wineries in Coonawara , Bellwetter which was recently opened to the public. The best part of this place was its renovated baths and Kitchen. Absolutely Beautiful. They stay was the cheapest of all that we stayed at, 30 AUD per night for an unpowered site. They also have Glamping options starting from about 200 dollars a tent, if you need that be checked as an experience. They do wine tasting for 15 dollars per person, but the price is waived off, if you buy a bottle after.

We visited the Naracoote caves on a very day, which was really an advantage for us. There are various tours that run around here. The most famous of the tours are the Alexandria Caves, which has a crystal like chandelier display of the stalagmites. We also did the Stick Tomato Tour and the Fossil Cave tour. The ticket per person was about 22-30 AUD per tour. They also, do have some combination offers as well. We got the stick tomato cave tour for free on purchase of 2 tours. The tour guides are very informative , and have their own interesting theories about the history of the caves and its whereabouts.

Mount Gambier or in other words the city of Blue lake. About an hour and half away from Coonawara, this small city is one of the major tourist destination because of the crater lakes right in the middle of the city. The colour of the water also seems to change colour based on the season. The name of this lake is quite apt, as its one of the bluest lakes you ever see. There are about 3 lookouts to view the lake, and it free to the public.

This city also has a sink hole cave right in the city centre, which is beautifully converted into a hanging garden.

This is one of the most famous road trips in the whole of lot. The drive through the turquoise blue waters and making it all the way till the 12 Apostles is definitely a check on the bucket list. There are a lot of beaches u can do a pitstop , although be prepared to have loads of sunscreen on and a day time beach tent(which i recently realised is very useful). Take the Gibsons steps to the beach from where you can see the 3 apostles upclose. Also, the another major tourist stop is the “Loch Ard Gorge“. These are your insta photo moments, so dont forget to click a pic or 2.

After the Ocean road trip, we headed back to Sydney, doing a stop over at Wagga Wagga.

I do suggest people to go beyond the comfort zone and have a full experience of the nature. Camping was one of the best things I have done so far. Being an IT guy, we are so engrossed with Technology, and this was our way of getting away from it.

I am an IT Engineer by profession and an hardcore traveler by heart and a huge foodie. Currently living in Sydney,Australia. Aim to travel the world and leave my mark on every place. :) View all posts by Shru :) 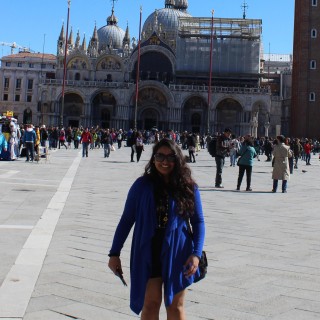 I am an IT Engineer by profession and an hardcore traveler by heart and a huge foodie. Currently living in Sydney,Australia. Aim to travel the world and leave my mark on every place. :)

To Nairobi And Back

Floating thoughts, A place where my beautifully weird thoughts floating around in my mind are posted.